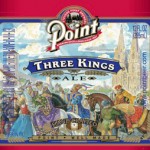 Point Three Kings is a highly drinkable golden colored Kölsh-Style Ale inspired by the story of the three kings whose remains reside in the Köln Cathedral in Köln Germany. Köln is the birthplace of Kölsh ale, often referred to as the ‘crown jewel of brewing art’. Elegant and well-balanced Three Kings is hand-crafted with a delicate fruity aroma, clean soft maltiness, and crisp subtle hopping – an adventure fit for a king.