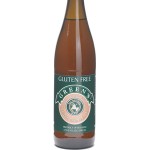 “Tripel” is a style that was originated by Westmalle Trappist Brewery in the 1930s, when they began to sell Westmalle Trappist Tripel. Rich and full-flavored, tripels are satisfying beers beloved by beer aficionados. Many breweries now produce a tripel, but a tripel made from all gluten-free ingredients, without barley, is a particular accomplishment. Fairly light body for beer of this strength; spice and herb nose with flavors of candied fruit. Aromatic, long finish.