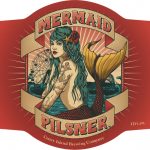 Mermaids, those mysterious aquatic lovelies, have popped up all over the world in legend since 1000 BC. No scientific evidence has ever surfaced to support their existence, but we’re not ones to argue with folklore.